We wish you all the best for the pandemic time...

Skylotec RIDER 3.0
The via ferrata set SkyRider is the innovation for safety on fixed rope routes. It combines two fully groundbreaking system components. One is the new steel carabiner SkySafe, made of light, absolutely rustproof INOX steel. The carabiner has high edge strength and a super grip owing to the two-component die casting on the trigger and a notch on the gate. The keylock gate and the extremely large gate opening (28 mm) make clipping in easier. The other component is a fully new and patented connecting element?the SkyTurn?instead of a second carabiner. The braking device travels along on the safety rope at chest level and, in an emergency, immediately softly brakes the fall. This contributes towards preventing dangerous injuries. When on the via ferrata no steel cable is available for attaching the SkyTurn, a carabiner can of course be substituted, so that the SkyRider set is still securing your every step. SkyTurn is easy to use and unclip, and so offers high safety at a low weight. The stretchable bands of the SkyRider via ferrata set have internal elastic bands to prevent getting caught or tangling. In addition, the SkyRider via ferrata set has a new style of webbed shock absorber.

Maybe these products are interesting, too!: 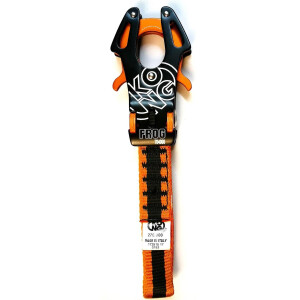